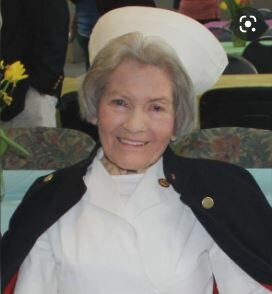 Services honoring the life of Hazel will be held Saturday, September 18, 2021 at 1:00PM in the “Field of Remembrance” located at Heritage Memorial Funeral Home. Immediately following the service Mrs. Hazel will be laid to rest beside her beloved husband at Magnolia Park Cemetery. Both masks and umbrellas will be made available for those who need one.  Mrs. Hazel will lie in state at Heritage Memorial Funeral Home, Wednesday – Friday from 8:30AM until 8:00PM.

For those who would like to attend the services virtually may do so by going to the Heritage Memorial Funeral Home Facebook Page, https://www.facebook.com/heritagememorialfuneralhome  and watch the livestream.

Hazel was born as Hazel Virginia Jones on February 17, 1927 in Wilkinson County, Georgia to the late Joseph E. Jones and Nattie Roberts. In June of 1940, she received the Daughters of the American Revolution Award upon graduating from the seventh grade. Hazel graduated with the class of 1944 from Wilkinson County High School in Irwinton, Georgia.

Throughout her distinguished career as a nurse, our mom recounted numerous stories from her early life as a child growing up on a farm in the late 1920’s and beyond.  In her own words, we would like to share some of those anecdotes.  Even as a child our mom had an amazing sense of humor.  She was also raised in a family that was devoted to God.  She often said that “she was raised by a hard-working daddy and a Bible-reading mama.”  She also says “mama taught us to pray and in so doing she taught us to believe.  This devotion to God I carried with me all of my life.”  All of us who knew and loved her can attest to her devotion and her unwavering faith in God.  She always believed that her life as a nurse was much more than just a career.  She felt that being a nurse was a calling.  She would often recount an early experience with her dog, Jip.  Again, in her own words, she said “When I was four years old, I had a puppy named Jip.  Jip was run over by a Model T Ford.  His leg was broken.  I knew that Jip had to walk, so I found me a board and tied some of mama’s curling rags around his leg and the board.  This was my first splint!  Jip kept that splint on and, of course, it healed crooked, but he was able to use his little leg.”  She would often tell us that after she helped her little puppy, she knew that her calling would be becoming a nurse.

Our mom would often tell us about many of the hard times associated with life on the farm.  For example, she told us about picking cotton all day in the hot sun, for a nickel a day!  But her mama would come to the cotton fields at noon every day.  She brought a large cast iron pot, full of vegetables grown on their farm.  Her mom would build a fire and hang that pot on a tree limb, making sure that her hard-working children had the nourishment they needed.  Our mom and her sisters made their own baby dolls, which were actually ears of corn.  They would use the silk from the corn as the baby’s hair.  She would always smile when looking back on those fond memories.  Sometimes she would tell us about the things she did not have.  “We had no electricity, no bathroom, no television, no cars and no radio except a battery operated one that our family would use to listen to the Grand Ole Opry every Saturday night!”  But she would also tell us that she did have running water.  “All of us children would go to the well every day and fill buckets of water.  When each of us had two buckets of water held in each of our hands, we would run with that water back to the house where mama was waiting for it.”

Our mom finished high school at the age of seventeen. She was determined to become a nurse.  World War II had begun, but this did not alter her desire to become a nurse.  On January 2, 1945, she joined the US Army Cadet Nurse Corps, where she served as a lieutenant in the Army. She studied nursing at  University Hospital in Augusta. Immediately upon her transfer, she was required to report directly to the University Hospital each morning.  After 4-6 hours of work in the hospital, she would then begin attending classes for an additional four hours.  She went on to graduate from college and fulfill her dream of becoming a Registered Nurse (RN) in June 1948.  She continued working at the University Hospital until 1950.  At that time, nurses were not allowed to be married.  However, in 1949 she met a young Navy veteran who had returned home from his service in World War II.  On February 21, 1950, she married that young veteran, who was truly the love of her life, Jasper William Colson.  They moved to Macon, Georgia, where she worked at Mercy Hospital until 1953. On January 2, 1951, she gave birth to her first child, Judy, and on February 20, 1952, she birthed her second child, Ken. In July of 1952, she  and her young family, moved to Warner Robins, Georgia.

In 1954, she helped Dr. William “Billy” Talbert and Dr. Virgil McEver to open the Warner Robins Clinic on North Davis Drive.  In 1957, this team, later joined by Dr. Dan Callahan, began administering the influenza and polio vaccines to the community, as well as the schools. They also delivered babies, many of whom she cared for throughout their lives.  It was during this time that she gave birth to her third child, John, on July 8, 1957.

In 1960, understanding the need for a hospital in Houston County, our mom, Hazel, helped to open and continue to work as a nurse for the Houston County Medical Center on Hospital Drive. She continued working for Dr. Talbert, as well as the Warner Robins Clinic on Davis Drive.

In the early 1970’s, this extremely busy young nurse never lost sight of her initial goal of becoming a compassionate and dedicated registered nurse.  But she now wanted to become a Physician’s Assistant (PA), which would allow her to better support her beloved doctors and patients.  She first gained the support, as well as the sponsorship, of Dr. Talbert and the Houston County Hospital.  In 1975, Hazel passed the Composite State Medical Board for Physician’s Assistants in Atlanta, making her the first certified PA in the state of Georgia.  She also participated in an extensive twelve-year (1980-1992) research effort.  At this time, Hazel was working with Dr. Beverly Sanders at Georgia Dermatology on Hospital Drive.  Both she and Dr. Sanders supported this Cancer Research Program for the University of Arizona.

In 1981, Hazel served on the Board of Directors for the Family Support Alliance for the Mentally Ill, and in 1985 she volunteered with the Heart of Georgia Hospice Association. May 1, 1987, Hazel went to work full-time for the hospice group for the remainder of her life. She also began working one weekend a month for the Elberta Nursing Home in 1995.

On August 25, 2001, Hazel’s husband, Jasper, whom she always called Jay, passed away. This, of course,  was a tremendous loss to our family; however, our mom remained dedicated to supporting our community.

As she progressed through her many years of service to the people of middle Georgia, she has been honored for her accomplishments and service to this community.  We would like to share some of these honors.

In addition to her parents and husband, Hazel is preceded in death by her grandchildren, Travis and Jason Hunter; two brothers and one sister.

Our mom often said “it’s not who I am, but whose I am.”  Her entire life was a testament to this core value. Our family would like to conclude with a statement developed by our mom. “The Lord has been with me and has blessed me through all of my life. I feel that I am carrying out His plan. I would like to thank God and the community for letting me reach out with my hands and my heart to serve you. God bless each of you.”

Please sign the online guest registry at www.heritagemfh.com and leave a personal condolence.

It is with great honor Heritage Memorial Funeral Home & Crematory is in charge of the arrangements.

To send flowers to the family or plant a tree in memory of Hazel Colson, please visit Tribute Store

Share Your Memory of
Hazel
Upload Your Memory View All Memories
Be the first to upload a memory!
Share A Memory
Send Flowers