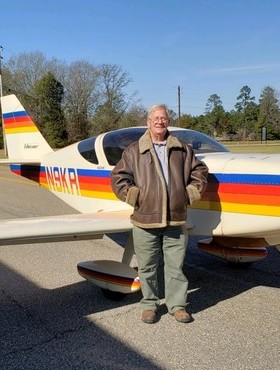 Warner Robins, Georgia –MSgt. Terry Bernard McConnell USAF (RET.), 70, passed away after a courageous battle against COVID-19. A visitation with family and friends will be held on Friday, April 16, 2021 from 4:00PM to 5:00Pm at Heritage Memorial Funeral Home. A Memorial Service honoring his life will be held at 5:00Pm on Friday, April 16, 2021 in the chapel of Heritage Memorial Funeral Home where full military honors will be rendered.

Terry was born on July 13, 1950 in Macon, Georgia to the late Martha Day and Johnny Johnson. Terry was a very genuine man who always put the needs of others before himself. His desire to serve came at an early age when he enlisted in the United States Air Force and served his country proudly for 21years until his retirement as a Master Sergeant. Terry was a very active man who always saw the best in people. He was the proud owner of Golf Cars of Middle Georgia for many years where he formed countless amount of friendships with his patrons. When Terry was not working, he could be found flying with the local EAA Chapter 38. Terry found great peace in an airplane gazing upon the beautiful blue skies and even help with the Local Eagle Scouts earn their badge by flying a few scouts in the open skies. Although, Terry loved helping others his most prized possession was his love for his family. He truly loved being surrounded by those he loved. He was very involved in family events and was often found making memories with his beloved wife, children, and grandchildren.

In addition to his parents there awaiting for him at the gates of heaven was his beloved step-father, Ted Theodore McConnell.

Contributions can be made in honor of MSgt. Terry McConnell to the American Heart Association, 5962 Zebulon Road, PMB 359, Macon, GA 31210.

It is with great honor Heritage Memorial Funeral Home has been entrusted with Terry McConnell’s arrangements.

Share Your Memory of
MSgt. Terry
Upload Your Memory View All Memories
Be the first to upload a memory!
Share A Memory
Send Flowers