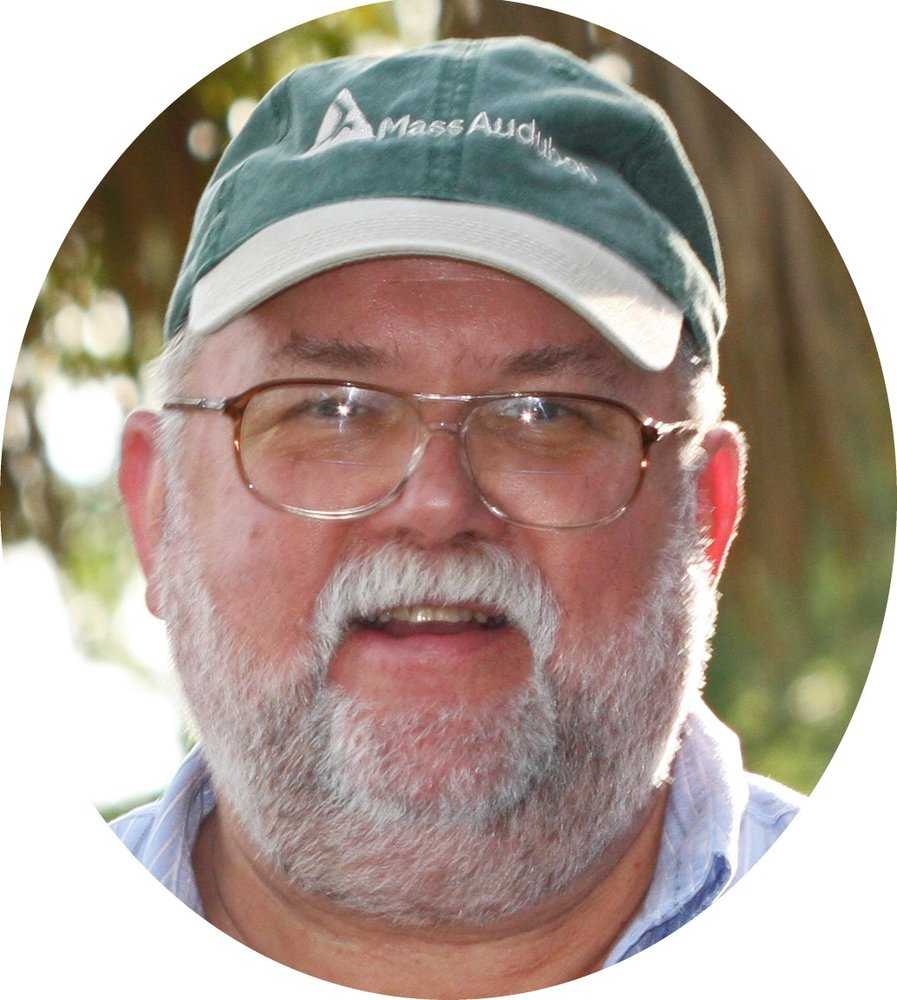 On Friday, October 30, 2020 Douglas W. Kimball died at Warner Robins, GA and entered eternal life.  He had battled asthma and diabetes all his adult life, multiple episodes of sepsis and osteomyelitis in his last years, but finally succumbed due to complications of diabetes and pneumonia.

Doug leaves the love of his life, his wife and birding companion, Catherine; his god-daughters, Chrissy Danko, Chelsea Cushman, and Leslie Wharton, whose love enriched his life; his child, Alex, who brought him challenges but also many warm memories; his brother, Alan and his sister-in-law, Phyllis, and their

Dennis, and Kevin Corrigan (and their wives), who were more like brothers (and sisters).  His life was blessed with the love of many friends, especially Dennis and Sue St. Laurent (and their children, Daryl and Kerry and their spouses), Kerry McRae (Chelsea’s mother), Jane McCarry, Richard Sanderson, Debbie Sears, Lucy Gertz, and Anne Booth Henderson… and the affection given to him by the many animals with whom he shared his life over the years.

A graduate of the Stockbridge School of Agriculture in 1973 (A.S. Animal Sciences), the University of Massachusetts in Amherst in 1978 (B.S. Natural Resources), Fitchburg State College in 1980 (M.Ed. Science Education), with additional graduate studies in education at Worcester State College (2007-10), and the Georgia Master Naturalist certification program (University of Georgia, 2013), Doug dedicated his life to teaching about the world of nature. First for nine years at the Springfield Science Museum/Seymour Planetarium (Springfield, Massachusetts), then the Monte L. Bean Life Science Museum at Brigham Young University (Provo, Utah), and finally, he spent twenty-five years with the Massachusetts Audubon Society, from which he retired in 2006.  He then began a second career teaching middle school science for a few years with the Worcester Public Schools (Massachusetts), and was known as “Mr. K” by his many students at Burncoat Middle School.  He also spent twenty-six years as an adjunct faculty member at numerous colleges, ending with twelve years at Elms College in Chicopee, Massachusetts.

Later in life, medical complications from diabetes and osteomyelitis required him to move south and avoid New England winters.  Doug and his wife Catherine re-settled in Warner Robins, Georgia, and he began a new life as a semi-retired naturalist… frequently enjoying Georgia’s swamps and woodlands and their diversity of wildlife.  He served as a volunteer nature photographer and creator of interpretive materials with the National Park Service at Ocmulgee National Monument (Macon, Georgia), an education volunteer at the Go Fish Education Center (Georgia DNR, Perry), and became a popular substitute teacher at Thomson Middle School (Houston County Board of Education).  Doug was also an active member of the Ocmulgee Audubon Society.  He served as a volunteer at the Museum of Aviation in Warner Robins GA.

Doug had a passion for nature photography and bird watching, and dearly loved the seashore and marine invertebrates.  He had a special interest in herpetology, and was absolutely fascinated by the many species of amphibians and reptiles he found in nature.  Throughout his life, he explored wetlands with his camera, and until medical issues forced him to refrain from doing so, frequently returned home soaking wet and covered with muck from wandering thru swamps, marshes, and vernal pools. The loss of his fingers due to osteomyelitis forced him to surrender his camera to a talented young man just starting out in nature photography… so his camera will live on!

His nearest and dearest will readily acknowledge that Doug spent most of his adult life on a spiritual journey.  He became a Benedictine Oblate at St. Mary’s Monastery in Petersham, Massachusetts, but his final spiritual home was with the Episcopal Church.  In lieu of flowers, Doug requested that donations be made to St. Mary’s Monastery, Box 345, in Petersham, Massachusetts 01366, or All Saints Episcopal Church at 1708 Watson Blvd in Warner Robins GA 31093.

Doug has requested that he be cremated, and his ashes be deposited into the Atlantic Ocean… preferably in the Gulf of Maine.

Share Your Memory of
Douglas
Upload Your Memory View All Memories
Be the first to upload a memory!