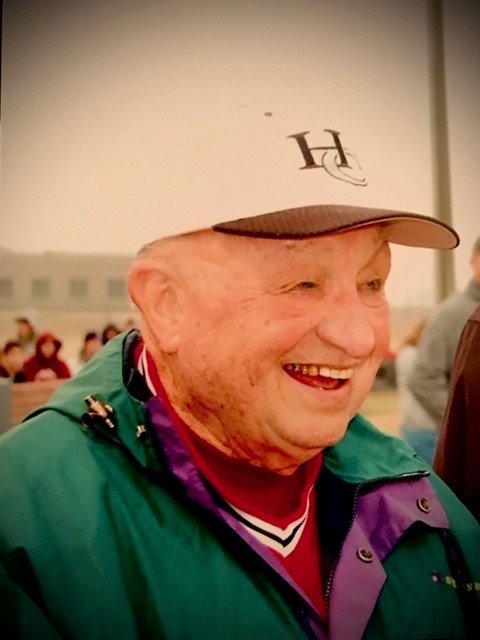 Claude M Lewis, "The Father of T-Ball ", passed away peacefully at home Sunday May 10, 2020, Mothers Day for wife Mary, surrounded by his family and beloved Sam. His life will be celebrated on Monday May 18, 2020 at the Southeastern Region Little League Complex, Snellgrove Dr at 2:00pm. The family will greet friends at 12 Noon. Safe social distancing is in place.

Claude was born in Macon GA and attended Lanier High School. He was a 4 Star athlete, and several scholarship offers were lost due to World War II. He was drafted during his Senior year and proudly served as a Squad Sergeant in the Army, Co. A, 11th Infantry Regiment K-9 Corps, active combat unit.

When he returned home, he completed his requirements at Lanier and began college at Mercer Univ. on the GI Bill. He also began his work in Recreation, a career that would last 65 years, from volunteer sandlot duties as a teenager, to Assistant Director in Macon; to Lakeland, Fla as Boys and Girls Club Director; to his greatest achievements in Warner Robins as the Director of the Dept of Leisure Services. His athletic career ended as it began, volunteer coaching, officiating, lining fields, cutting grass, wiping noses, hollering "atta boy...even I struck out once" and the boys favorite " cawwww Babe!"

After he retired he began his lawn service, "The Lawn Ranger", which did not last very long because he found his next favorite job, Bailiff with the State Court. He loved this staff like family. They always had a gathering for his birthday, and "his girls" continued to bring lunch and visit with "Pops" the rest of his life.

From the "Demon's Den" in the 50's, to the "Rec Center" in the 60's, it was the place to be. We learned to dance standing on top of Claude's feet, to roller skate with skates he scavenged at the rink in Macon, they might not match but nobody cared! Boxing, basketball, ping-pong, pool, and on the small stage, drama practices were all happening. It was the beginning of many accolades to come:  the "Outstanding Recreation Dept" in the State of Georgia, 1963 (in only 5 1/2years); 1964 and 65 elected President of the Georgia Recreation and Parks Assoc and awarded the Distinguished Professional Award. Into the 70's and 80's, growth was quick with pools, parks, ballfields, numbers into the thousands of adults and children participating. Basketball, track, baseball, softball, swimming and diving, football, cheerleading, Jr Rifle Club, Archery Club, stamp and coin collecting, square dancing, speech and drama, Sr Citizens Club, ceramics, dances, lessons of every sort imaginable, including belly-dancing exercise!  Claude had award winning Golden Gloves boxers (he was a Middle-wt GG Champion in 1945). The Teen Council won the Best In The State Award 8 years in a row, missed one and came back for 4 more! He was a firm believer of equality in sports, if the guys had a marble tournament, the girls had a marble queen!  In the midst of all this, the dept won "Outstanding Recreation Dept" in the State of Georgia, again and again! (1968 and 1986).

Yes, he invented the rules, regulations, the Game of T-Ball.  Claude's rules are used all over the world. He traveled many places with his old slide show presentation, explaining the why's and why not's, a true Ambassador for the game! He was honored for his efforts in 2008, attending the last T-Ball game held by a President (George W Bush) on the South Lawn at the White House.

Claude was the first to regulate and start a football program for Mini-Mites (age 5-6), which correlates directly to the year WRHS won its' first State Championship! He was also the first to lower the goals for young basketball players. Long before the portable low goals were invented, Claude had low goals bolted to the walls in the old Demons Den!

Claude loved this community, Mary had to keep score and run concession stands just to see him! He loved his Bonaire Methodist Church and church family. He taught Sunday School as long as he was able, he had a beautiful voice in the choir, and sang solo on many special occasions. He was a member of the Civitan and Optimist Clubs, and Air Force Assoc. He was a member of the Football Officials Assoc, and held the chains for WRHS football games 25 years. He was one of the guarantees on the original loan to build the new  WRAmerican Little League facility. He was on the committee that brought the Southeastern Region Little League office and ensuing beautiful complex to our community, and was so excited to finally attend the Little League World Series in Williamsport in 2008.

Through the years and these accomplishments, Claude has been awarded many honors:  1997 the "Key to the City" from Mayor Donald Walker, on his and Mary's 50th Wedding Anniversary.  1998 the Rec Center was named the "Claude M Lewis Center" and a bronze bust unveiled.  2006 the T-Ball field at the WRAmerican LL Park was dedicated as the "Claude Lewis Field, Father of T-Ball".  2007 inducted into the Georgia Recreation and Parks Assoc "Hall of Fame".  2010 "Citizen of the Year", WR Civitan Club.  2013 inducted into the City of Warner Robins "Hall of Fame".  2014 "HoCo Citizen of the Year", International City Optimist Club.  2014 Claude received the "Key to the City" from Mayor Randy Toms.  2017 the GA Sports Hall of Fame awarded him the "J.B. Hawkins Humanitarian Award".

Claude was a great coach to so many. His greatness is not counted by wins, but by the multitudes he coached that now call him friend. They are telling their children about him right now, just like their parents did them. Seven  generations and counting, so many are better because of his service to our community. "It is not what we get out of our profession, but rather what those we serve gain from our dedication and effort." Thank you Claude Lewis.

The family wishes to thank Encompass Healthcare and Hospice. The long hours and tender words of counseling will never be forgotten. We will be forever grateful to Palms Medical Transport for their thoughtfulness and gentle care, and Hobbs Home Medical and their kind staff.

Donations in memory of Claude can be made to The Memorial Fund at Bonaire United Methodist Church. 221 Church St. Bonaire, GA 31005, or at BonaireChurch.com

Please go to www.heritagememorialfuneralhome.com to sign the online guestbook and to leave a condolence for the famiy.

It is with great honor Heritage Memorial Funeral Home has been entrusted with Mr. Claude Lewis's arrangemtns.

Get Directions
Monday
18
May

Get Directions
Monday
18
May