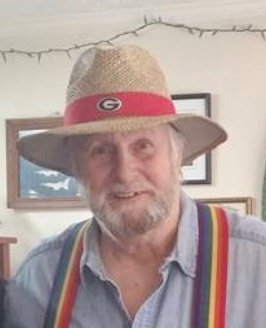 Warner Robins, GA – Robert “Sam” D. Ryan, 76, passed away Friday, January 24, 2020. A graveside service will be held Wednesday, January 29, 2020 at 2:00pm in Parkway Memorial Gardens Cemetery. A visitation will be held one hour prior to the service from 1:00pm to 2:00pm Wednesday January 29, 2020. Burial will be immediately after the service. Pastor Bruce Brookshire will officiate.

Sam was born January 16, 1944 in Warner Robins, GA to the late William T. Ryan, Sr. and Hilda Laverne Ryan. Sam proudly served his country in the United States Air Force. He later went on to be an over the road truck driver traveling the country before finally retiring.

Sam was passionate about Georgia Bulldogs football, Harley Davidson motorcycles and the military.  Sam had one of the biggest hearts.  It showed by being a lifetime St Judes contributor and also when it came to his family and especially his grandchildren. Sam leaves behind one of his best friends that went everywhere he did, his dog “Margarita”.

Please go to www.heritagemfh.com and sign the online guest book.

Heritage Memorial Funeral Home & Crematory are in charge of the arrangements

Share Your Memory of
Robert "Sam"
Upload Your Memory View All Memories
Be the first to upload a memory!